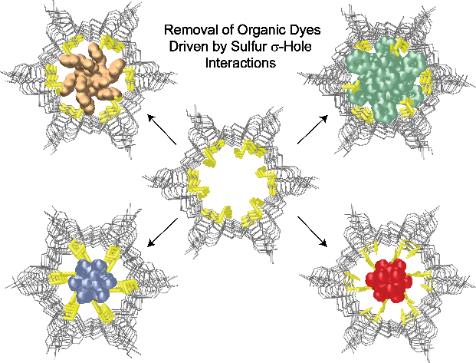 The combination of high crystallinity and rich host-guest
chemistry in metal-organic frameworks (MOFs), have situated them in
an advantageous position, with respect to traditional porous materials,
to gain insight on specific weak noncovalent supramolecular
interactions. In particular, sulfur σ-hole interactions are known to play
a key role in the biological activity of living beings as well as on
relevant molecular recognitions processes. However, so far, they
have been barely explored. Here, we describe both how the
combination of the intrinsic features of MOFs, especially the possibility
of using single-crystal X-ray crystallography (SCXRD), can be an
extremely valuable tool to gain insight on sulfur σ-hole interactions,
and how their rational exploitation can be enormously useful in the
efficient removal of harmful organic molecules from aquatic
ecosystems. Thus, we have used a MOF, prepared from the amino
acid L-methionine and possessing channels decorated with –
CH2CH2SCH3 thioalkyl chains, to remove a family of organic dyes at
very low concentrations (10 ppm) from water. This MOF is able to
efficiently capture the four dyes in a very fast manner, reaching within
five minutes nearly the maximum removal. Remarkably, the crystal
structure of the different organic dyes within MOFs channels could be
determined by SCXRD. This have enabled us to directly visualize the
important role sulfur σ-hole interactions play on the removal of organic
dyes from aqueous solutions, representing one of the first studies on
the rational exploitation of σ-hole interactions for water remediation.